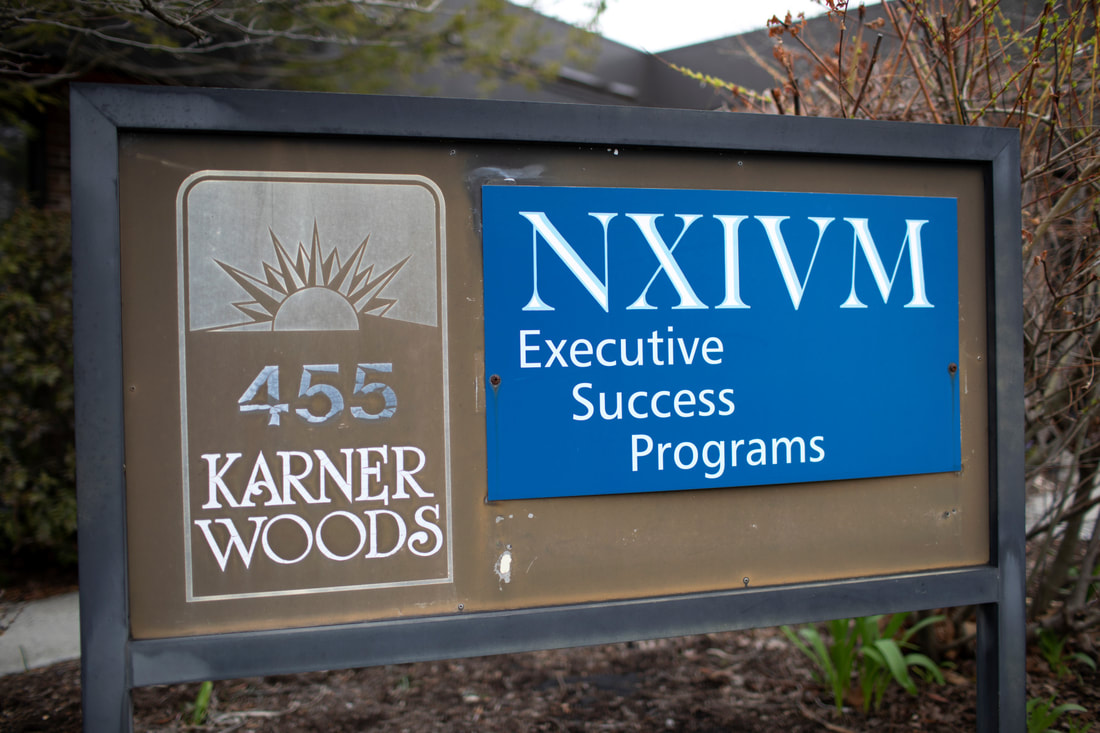 ​When she was 23 years old, the heiress with a fortune estimated at around $200 millionwas an accomplished equestrian sponsored by a German clothing company. A high-school dropout, she was the youngest daughter of late billionaire and philanthropist Edgar Bronfman, Sr., who took over the Seagram Company from his father in 1953. Clare and her sister Sara grew up about as cosmopolitan as they come, splitting time between their family estates in Virginia and the Hudson Valley, as well as a home in Sun Valley and an apartment on Fifth Avenue. Clare started riding horses in her teen years, going so far to open a farm to train them. Born into all the luck in the world, her life could have gone one of many directions. Instead, she ended up pleading guilty in a Brooklyn Federal Courthouse as part of an alleged sex cult earlier this year.

The trial of Keith Raniere, leader of a group called Nxivm, finished up last week. Closing arguments were made yesterday. The trial has exposed disturbing details of the happenings within the group, which advertised itself as a “self-improvement organization” but has been accused are far more sinister, cult-like activities, including branding women with Raniere’s initials and forcing them to have sex with him. Raniere is facing seven felony charges, including racketeering conspiracy, sex trafficking and conspiracy to commit forced labor (he has denied all charges, and his lawyer did not respond to a request for comment on this story). His co-defendants, including Bronfman, Mack and Nxivm co-founder Nancy Salzman, have accepted plea deals. If convicted, he could face life in prison.

It has been reported that Clare Bronfman was one of several people among Nxivm’s “inner circle,” all of whom have been charged in connection to the group (former Smallville actress Allison Mack was another). Bronfman allegedly gave up to $150 million to the group and Raniere since 2002. In April, she pleaded guilty to harboring an illegal immigrant and enabling credit card fraud. It’s likely that she will serve a maximum of 27 months in prison.
When she had the chance to address U.S. District Judge Nicholas Garaufis on April 19, Bronfman was apologetic. “Your honor, I was afforded a great gift by my grandfather and father. With the gift comes immense privilege, and more importantly tremendous responsibility. It does not come with an ability to break the law; it comes with a greater responsibility to uphold the law. I failed to uphold the following laws set forth by this country, and for that I am truly remorseful.” She also admitted to knowingly harboring a woman brought to the U.S. on a fake visa and helping Raniere use a deceased woman’s credit card.

Some think her money and her name have helped Bronfman avoid more charges and a longer sentence. Others believe she’s a victim. While her fate is currently being debated in court, it’s time to look at what comes next for the woman who decided to take a much different path than the one laid out for her by her family, and how she got here.

Growing up and joining Nxivm for the most part, Clare Bronfman’s childhood had all the stereotypical benchmarks of children born into wealth. She attended multiple boarding schools, first in England, then Connecticut. While in school in England, she and her sister Sara would visit their mother, Rita “Georgiana” Webb, who was living in Kenya at the time. Her parents were married and divorced twice. After the tenth grade, Clare dropped out of high school to join her father on his estate outside Charlottesville, Virginia. Edgar Bronfman, Sr., was the son of Samuel Bronfman, a Russian immigrant who founded the Distillers Corporation in Montreal, Canada, in 1924. The family sold liquor to northern cities in the United States during the Prohibition era, and then acquired Seagram Co. in 1928. Edgar went on to become the president, treasurer and CEO of Seagram’s and donated a large portion of his money to Jewish causes. He previously had five children with his first wife, investment-banking heiress Ann Loeb. Those children were all in their teens and 20s when Sara and Clare Bronfman were born.

In a 2010 Vanity Fair profile, a friend of the youngest Bronfman sisters said, “They were the last two of seven children, and there was a significant age gap, and they really weren’t always under the umbrella of the Bronfman family. It’s noticeable, when you’re with them, that they were not always sitting at the exalted Bronfman table.” It was Clare’s sister Sara, the more outgoing of the two, who first introduced the family to Nxivm. Sara, who has not been charged or implicated in the Nxivm case, found a self-improvement group in Albany, New York, that had been founded by Raniere and Nancy Salzman, a trained nurse. According to Forbes, the group offered “life coaching classes mixed with a little neuro-linguistic programming and group therapy techniques.” Within the group, Raniere was known as “Vanguard” or “Grandmaster” and Salzman was “Prefect.” About 16,000 people took Nxivm courses, which The New York Times reports cost more than $5,000 each. The group revolved around Raniere, who personally claimed to be one of the world’s “top three” problem solvers. His birthday was celebrated over the course of about 7-10 days, called “Vanguard Week,” and members were taught that he was the “smartest and most ethical person.”

The side of the leader that his followers knew was a facade of charisma and intellect, but underneath it all, a darkness lurked. Raniere was once called a “compulsive gambler, a sex addict with bizarre desires and needs, and a con man that specializes in Ponzi schemes” by one of his former girlfriends, Toni Natalie, according to the Times-Union. He usually slept all day and would wake up at night to play volleyball or take walks with female acolytes. During Raniere’s trial, jurors were shown sexually explicit images of a 15-year-old girl that Raniere allegedly kept in his study.

According to another cult expert, Cathleen Mann, who has followed Nxivm for 15 years, there are three components to what makes up a cult. The first is a self-appointed leader who controls all information and has no checks or balances to their power. The second is that the group observes undue influence, which is a “type of indoctrination or manipulation of people without their acknowledgment or consent.” And finally, the group practices deceptive recruiting, which means that a person is not told the true purpose of the group or presented with the information they need to make an informed choice about joining. By the time they’ve figured out what is actually going on, “they’re usually too involved in it to just leave.”
Nxivm checks all three of those boxes. In the case of Clare, the third component may have been what drew her in. Sara, who was 25 at the time, convinced Clare, who was 23, to start taking classes with her.

A rift grows as the girls’ participation in Nxivm piqued their father’s interest, so he started taking classes in order to learn more about what his daughters were involved with. At first, Edgar was supportive of the group, but he lost enthusiasm for it after finding out that Clare had loaned Raniere and Salzman $2 million. In 2003, Forbes published an article about Raniere and the group that included a startling quote from Edgar: “I think it’s a cult.”
From there on out, Raniere claimed that Clare had committed an “ethical breach” for telling her father about the loan.
Clare’s relationship with her father, meanwhile, only became more strained. During Raniere’s trial, it was revealed that Nxivm members hacked Edgar’s computer to spy on his emails. According to a witness in the trial, it was Clare who installed the program onto Edgar’s computer directly.
Raniere continued to disrupt the father and daughter’s relationship.

Edgar couldn’t cut off his daughter’s access to their money because of the way their trusts were set up. In an email exchange shown as evidence during Raniere’s trial, dated January 6, 2011, Edgar tried to convince his daughter he was not funding any of the group’s detractors or Raniere’s perceived enemies. “Whether or not you want to believe me, I do not lie, and I love you two very much,” Edgar Sr. wrote to Clare. “Someone is not telling you the truth. Why don’t you try and figure out who that might be? Who has something to gain? Certainly not me. What would be my motive?”
He signed the email: “Tons of love, even if not requited, Pops.”  Edgar Bronfman died two years later, in 2013.

Funding Nxivm’s litigation powerhouse after the initial arrests of Nxivm members, including Keith Raniere and Allison Mack, Clare Bronfman established a trust to fund the defense of Raniere, herself and other accused Nxivm members, but it was unclear how much money was in it. Earlier this month, it was reported by The New York Post that she gave more than $14 million. The trust has one other donor: former high-ranking Nxivm member Jack Levy, who donated $1,030. But this is just a drop in the bucket compared to the amount of money Bronfman put into litigation against people who left Nxivm or who Raniere perceived as an enemy: an estimated $50 million.

Peter Skolnik, an attorney who fought against Nxivm for over a decade, told Forbes that over 15 years, it is “estimated that (Clare) hired 50-60 lawyers from about 30 law firms to pursue cases against nearly a dozen Nxivm critics.

” Cathleen Mann tells InsideHook. “And the Bronfman’s are still paying lawyers to protect this group. So it sounds like they’re still indoctrinated to me.” Another trait of a cult is a system of levels, and each level has its own reward, but you have to spend money or complete courses to get to that level. Some cults rely on subscription services to make money, while others sell training or course materials to members. Scientologists reportedly spend thousands on books written by founder Ron Hubbard, courses and therapy. Some have high-profile donors (Scientology has Tom Cruise, for example), though not to the extent the Bronfman’s did.

A lot has been revealed during the past few weeks of Raniere’s trial. Witnesses have testified that he whipped and beat members of the organization. Women “slaves” within a secret society of Nxivm were held down and branded with a cauterizing device. Women were forced to give collateral — nude photos or other embarrassing material — and were threatened with its release if they didn’t have sex with Raniere. Women were forced to starve themselves in order to look a certain way. A witness claimed that at one point, Allison Mack subsisted on just 500 calories a day. Mack told the witness that Raniere “wouldn’t care about her” if she gained weight; she weighed about 107 pounds. Mack herself had “slaves” who were forced to take a group nude photo every week. Daniela, the witness who read Edgar Bronfman’s emails, said she was imprisoned in a room for two years as punishment for falling in love with another man besides Raniere. One witness testified that Raniere had sexual relationships with about two dozen women in the group, including Clare Bronfman, and that Bronfman was forced to wear a jock strap because she was a “know-it-all.”

“Keith Raniere is the stereotypical cult leader and what’s unusual about this case is that he’s had a lot of help, I don’t think he could’ve accomplished what he did without the help of the women in his inner circle,” Mann tells InsideHook. “And regardless of the fact that they pled guilty and testified against him, they’re still largely responsible for creating such a destructive group. He didn’t do it on his own.”

But during a hearing on March 27, after Judge Nicholas Garaufis asked her if she had been consulting with the notorious lawyer Michael Avenatti and if she knew he had been indicted on charges that he tried to extort tens of millions of dollars from Nike, Bronfman grew very pale and fainted, according to reports.

cult expert, an expert on cults