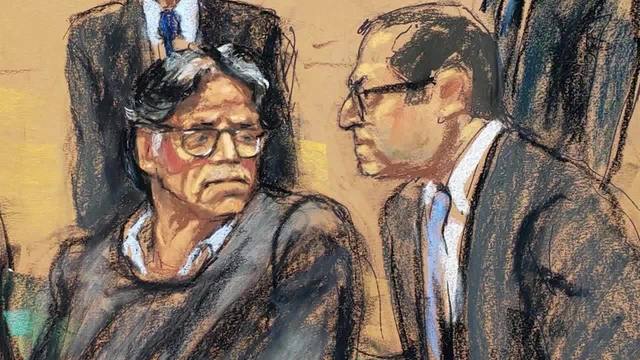 NEW YORK--Keith Raniere sat at the top of every pyramid scheme under the expansive umbrella organization known as NXIVM, according to the office of the U.S. attorney for the Eastern District of New York. As the ongoing trial capped off its first week, Raniere sat alone again, as the sole defendant—a fitting image for the founder and “grand master” who sat at the apex of the secret pyramid scheme.

At the federal court in Brooklyn, Raniere appeared enthusiastic and high spirited, sporting a slight smile of sorts as witnesses, all former members of NXIVM (pronounced Nex-ee-um), testified against him. Switching between gray and blue cardigans, Raniere, referred to as “Vanguard” by his devotees, scribbled notes and whispered to his defense attorneys--Paul DerOhannesian to his right and Marc Agnifilo to his left. He rarely looked at the witnesses.

Two former members described a pattern of manipulation, blackmail, humiliation, and outright deception. One spoke about being a sex slave in a secret society within NXIVM called DOS, while another spoke about the group’s financial workings and rankings. Both broke down in tears as they recounted their years in the group.

Raniere, 58, faces a maximum sentence of life in prison for seven criminal counts, including sex trafficking, forced labor conspiracy, and racketeering. The other five co-defendants in the U.S. v. Raniere et al. case have all pleaded guilty; some pleas came after prosecutors added child exploitation charges against Raniere based on evidence he had sex with a 15-year-old girl.

Prosecutors say Raniere founded “several pyramid-structured organizations” including NXIVM, which he called a “self-help organization for women.”
During testimony on May 9, Mark Vicente, a former member who served on the executive board, provided an inside look into the company’s ranking system dubbed the “strike-path.” Beginning members were given a white sash to wear around their necks before they could move up in the company by recruiting more participants and enrolling in more classes themselves. After moving up in rank to a yellow sash, members could apply to become a coach. Members could only start earning money in the next rank, called “proctor,” where they earned a 10-percent commission for every new recruit they brought in. Vicente said there were more than 60 companies under NXIVM.

“He was always fascinated by pyramid schemes,” NXIVM’s ex-publicist-turned-whistleblower, Frank Parlato, told The Epoch Times in a phone interview.

In this courtroom drawing, defendant Keith Raniere, center, is seated between his attorneys Paul DerOhannesian, left, and Marc Agnifilo during the first day of his sex trafficking trial on May 7, 2019. (Elizabeth Williams via AP) Before forming NXIVM, Raniere was a member of a multi-level marketing company called Amway before starting his own company in the 1990s. That company, Consumers Byline, was later shut down by the New York state attorney general. Raniere was forced to pay fines and was banned from operating such a scheme again. But Parlato said Raniere skirted the terms of his agreement when he began NXIVM by not listing himself as an owner. “Many of the members out there selling the courses were not aware that he [Raniere] was leading financially,” Parlato said. “He pretended to be a renunciate. He pretended to have no attachments to women or money, [that he] only had one ideal to elevate the consciousness of his followers and those who chose to take his exalted classes.”Vicente said that while he was a member, he was always “in the red” financially and struggled to earn a profit, and that many others reported the same. One intensive class usually cost around $6,000. Vicente said he had to work without pay for 16 to 18 hours per day for about a year before he could move up in the ranks. This, he testified, was regarded as moving up quite fast in the company. Each intensive class lasted about 8 days.

Parlato said most members spent the bulk of their years in the group selling and taking courses, believing they would earn big money from it one day.
“They made $75,000 or 80,000 a year in commission, they would be spending $40,000 taking more classes,” Parlato said. “Keith continued to profit.”
‘Earth Shattering’ Testimonies Raniere has pleaded not guilty to all charges. His lawyers, in their opening statements, called on the jury to focus on the motivations and not the specific actions of Raniere, arguing that it was all consensual and that people needed to take more personal responsibility for their actions.

Cathleen Mann​, a legal consultant who has worked in about 100 cases involving cults and runs an independent practice in Colorado, told The Epoch Times in a phone interview that Raniere’s attorneys have only two options in their defense, since there is such an extensive trail of government evidence. “My theory is the defense is going to argue, one, that Raniere didn’t know anything about all of these activities, that he was kept separate, and two, that cults don’t exist,” she said. “What has been testified to already is just earth-shattering; it’s so damaging that I don’t know how he can sit there and listen to all this.”

According to Vicente, high-ranking members of the group also objected to the use of the word “cult.” “They brought up the word ‘cult’ and said the word doesn’t exist. There’s no definition for it,” he said during his testimony.

Mann called that argument a “terrible” defense, but that Rainiere’s lawyers don’t have much choice. She explained how a racketeering or labor conspiracy charge alone could send Raniere behind bars for 25 years. “What else can they say? I kind of call it the Charles Manson defense, which is where he said I never was there, I never killed anybody. … I think its a very, very risky defense—it’s the only one they have,” she said.

Charles Manson, the leader of the infamous Manson Family cult, originally received the death penalty, which was later commuted to life with possible parole after California invalidated the state’s death penalty statute in 1972. He died at the age of 83 in 2017.

It would be a “big mistake” if Raniere testifies, although he probably wants to, Mann said. She referenced Raniere’s “narcissistic” tendencies and said that if the prosecution is critical in their cross-examination, “he is going to have a bad reaction to that.” She added that his lawyers will advise him not to testify because he comes off as “very arrogant” and that “no one wants to hear about how great or how high his intelligence is.”
“It’s a unique case because a lot of these charges and arguments have never been used in a cult case before,” she said. “So the way that this turns out is going to be a template for a lot of cult cases going forward. It’s being watched very, very carefully because a lot of cults do these things, but I don’t know of any that have been charged.”

Parlato told The Epoch Times previously that former “Smallville” actress Allison Mack, a top recruiter in the secret DOS scheme, may testify against Raniere. DOS is an acronym for the Latin “dominus obsequious sororium,” loosely translated as “master of the slave women.”

A source told Mann that if Mack does testify, the prosecution will ask her to show her “brand” to the jury. The brand is a symbol made up of Raniere’s initials and burned onto the skin with a cauterizing pen during a process that took “20 to 30 minutes,” according to court documents.
“From what I’ve heard from a good source is that they are going to show the brand to the jury,” Mann said.
Secret Slave Society The master-slave society known as DOS employed a pyramid structure involving levels of “slaves” headed by “masters”; slaves were then expected to recruit their own slaves, thus becoming masters themselves. Raniere was the “highest master” of DOS and made other members—all women—have sex with him.

In DOS, directly under Raniere were six so-called “first-line masters,” who were slaves only to him. Those in the first line, which would be equivalent to the second tier in a pyramid scheme, had to recruit six more women each as their own slaves. Then each of those six would then recruit their own slaves as well.

The government is charging Raniere for forced labor conspiracy, stemming from the evidence that slaves were required to work for their masters.
DOS members were allegedly recruited on the condition that they would give up personal, often embarrassing, information about themselves, including compromising images or videos, as “collateral.” Once inside, members were regularly required to provide additional collateral to ensure that they kept the group’s activities secret.

“There was no [monetary] cost in DOS, but it was still a pyramid scheme—the payment was in slavery,” Parlato said. “Raniere created the world’s first blackmail and branding pyramid scheme.” Raniere brought a Mexican family with three girls and a boy to live in upstate New York, where NXIVM’s headquarters was located, under the guise of tutoring children.

“Instead, he had sex with all three daughters and, in order to do it, he turned family against family, sister against sister,” Assistant U.S. Attorney Tanya Hajjar said in her opening statement.

One sister is expected to testify about how Raniere locked her in a room for nearly two years with nothing but a mattress and “pen and paper,” as punishment for falling in love with another man. She was then sent back to Mexico without her documentation papers because Raniere couldn’t forgive her, despite countless apology letters.

The Epoch Times previously explored Raniere’s childhood through interviews with some of his former classmates, who revealed how his moral descent could have stemmed from a deep resentment of girls and women he developed after experiencing rejection in his youth. This apparent hatred of the opposite sex, coupled with a need to be adored, hinted at what he would later become.